After reading over 200 books in the last 3 years, this is something that’s stuck out as a theme across many books: you become what you think about. Your external world is often a reflection of your internal world, just as writing is the mirror of the mind.

For some people reading this, it’s obvious. For others it sounds like voodoo.

Here’s an amazing experiment you can try (stolen from one of my favorite books).

Find a piece of paper, a pen or pencil, a cup, a piece of string, and a ring or key. Draw a circle using the cup as a guide. Now draw a line through the middle of the circle, both vertically and horizontally. When you’re finished, it should look like the image below. 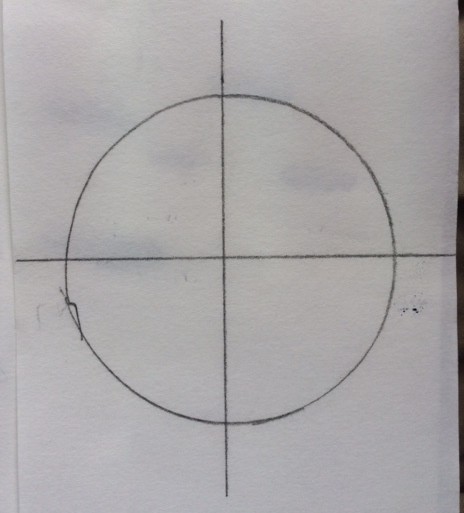 Now take about 5 inches of string and tie a ring (wedding or jewelry) or a key to one end of it.

Hold the top on the string so the ring or key is a few inches from the crosshairs in the center of the circle.

Hold the string steady. Now, with only your eyes, follow the edge of the circle going clockwise. Continue to do that for at least 30 seconds.

Now switch directions and follow the circle, with only your eyes, going counter-clockwise for 30 seconds.

Now look up and down the center line for 30 seconds.

Spoiler: the ring that you’re holding from a piece of string will begin moving in the direction that your eyes are moving. Even though you aren’t consciously trying to make it move in that direction, it will follow your focus.

Just believing something is possible doesn’t mean it can happen (I’ll never be able to fly), but for anything to happen, you have to first believe it is possible.

Look at the example of Elsie Boyd. Elsie was a single mother of five kids. When her youngest daughter, Ann, contracted polio, the doctor told her that her daughter would never walk again and would live out her days in a wheelchair. Elsie disagreed. As explained in this book:

When Elsie brought Ann home, it was clear that neither the operations nor the treatment were of much benefit. Ann wore heavy braces on each leg and could walk only with the assistance of crutches.

By now Elsie was fighting to maintain control. She forbade the use of the word “cripple” in her house. It did not matter to her that doctors said Ann would never be able to walk. She decreed that Ann would walk, that she would be as much like other children as possible.

John stood to the side and watched all this. He heard the arguments between his mother, who was adamantine in her insistence that Ann exercise daily, and Ann, who tried to avoid the uncomfortable exercises. But Elsie prevailed, as she usually did. Ann walked with braces and crutches until she was around eleven years old, and then, as Elsie Boyd had decreed, she put aside the crutches and walked with no assistance. She limped, but it was not obvious that it was from polio.

Careful on the labeling

An interesting thing about Elsie is her banning the use of “cripple.” If she had allowed that word, I wouldn’t be surprised if her daughter was never able to walk. One of the deepest desires people have is to feel accepted. Another desire is to make sense of the chaos around us, which we often do by labeling and forming narratives.

When these two desires collide, someone can find themselves stuck in a label even though they have the potential for something greater. People come to have a fixed view of themselves when a growth mindset is possible.

All of this reminds of the quote: