Love or hate Mark Cuban, it’s impossible to argue that he’s not entertaining or interesting. Being a somewhat causal reader of his blog, spending $2.99 on his ebook didn’t require much persuasion. Yes, they’re all available on his blog for free, but I’d rather pay a few dollars to read them on the Kindle, where I can easily highlight my favorite parts.

The book title and the cover are a little cheesy, but that’s alright because this was a pretty enjoyable read. I was able to read the book from start to finish in between eating and naps on Thanksgiving day.  It’s a short, punchy book.

The stories are fairly entertaining without too much overlap and repetition between blog posts/chapters. Though it was a quick read, I ended the book with several highlighted sections.

It’s easy to look at Cuban and just see him as some guy who was in the right place at the right time and stumbled into success. But that’s just the superficial TV version of him and an unfair assumption.

Cuban really worked for what he got. Sure, he might of had some luck along the way, but most of it was probably a consequence of putting in the hours. He knows how to hustle and use his time effectively.

The biggest “YES!” moment of the book came when he ranted about schools not teaching sales. It blows my mind that I didn’t learn ANYTHING about sales in college. Nothing. Not one footnote in one class about how to sell yourself and your skills. Yet, like Cuban states in the book, if you want to never be unemployed become good at sales. If you can sell, you can work anywhere.

It was somewhat fascinating to see some of the steps he took in his life to become successful. The one choice that stuck out was when he chose to close a sale instead of opening the store he worked at that morning. As he says, “It’s always the little decisions that have the biggest impact.” He closed the sale and was also fired. That one little decision had a big impact on his path towards success.

“Your customers can tell you the things that are broken and how they want to be made happy. Listen to them. Make them happy. But don’t rely on them to create the future road map for your product or service. That’s your job.”

“Once you have found out what you love to do, there is only one goal: to be the best in the world at it.”

“It’s really easy to know if you are in the right job. If it matters how much you get paid, you are not in a job you really love.
There has yet to be a successful company that has survived with zero sales.”

“The edge is knowing that while everyone else is talking about nonsense like the “will to win” and how they know they can be successful, you are preparing yourself to compete so that you will be successful.”

“In sports, the only thing a player can truly control is effort. The same applies to business. The only thing any entrepreneur, salesperson or anyone in any position can control is their effort.”

“It would have been easy to judge effort by how many hours a day passed while I was at work. That’s the worst way to measure effort. Effort is measured by setting goals and getting results.”

If you’re looking to start your own business or just want a few good ideas, this is essential reading. It’s short, to the point, and only $2.99. Either dig up the old blog posts and read them online or just buy the book. Either way, it’s content worth reading. 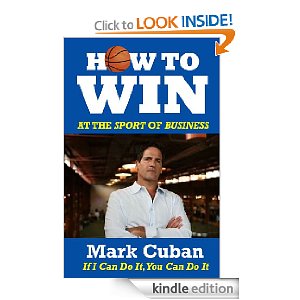 Find “How to Win at the Sport of Business: If I Can Do It, You Can Do It” by Mark Cuban on Amazon